The important words of Mrs L. H.: See the closing word at the end of the video or see below!

"Apparently people have to get a hammer from time to time from God that they can live normally again if you look at the development; now we have the salad. And now one can only hope that this immense emergency will bring people back to the values that are really necessary."

The German language document you may find here!

At Easter my person would also like to send at least one Easter greeting via the Internet and is pleased that the "Easter Lamb" cannot be misused this year, since no Easter celebrations may take place in the Roman Catholic churches for the well-known reasons of the Corona pandemic!

Not only God can "rest a little", the earth can at the moment recover a little from the insatiability and exploitation of mankind and calm down easily. Even the environment can regenerate a bit at the moment and the animal world can breathe easy.

Regrettably, today's human beings cannot realize or take serious alarm signals from the earth and the environment, so that end-of-time capacities can no longer be listened to and want to no longer listened to, such as Mr. Dirk Steffens is a capacity in the field of causal research for an epidemic or pandemic, otherwise the entire economy or the questionable stock exchange could collapse!

The cycle of life cannot be shown or be made more clearer, in that humans are not entirely blameless in the numerous new epidemics or even now in the pandemic, and in the end the wisdom and talent of the individual are ignored, thus the human being no longer seems to be able to live a meaningful life with foresight and protection, whereat is only smiled by many ones!

For this reason, too, my person has to give a violent nasty shock at the same time at Easter, so that raise the roofs, because the special situation, in which the world is in also requires special measures and special people, who unfortunately are not approached sufficiently or have been recognized.

However, it was recognized that the social behaviour of society could change for the better through the pandemic, in that everyone will move closer together.

Furthermore, in the abovementioned Talk-shows on TV repeatedly was explained that many billions of euros have been made available to the population by performing the shutdown, so that the care provided by the hospitals or intensive care units and the social networks of the health system is guaranteed and not, as in southern Europe, e. g. health care must collapse completely!

It was also particularly commendable that some European countries, preferably the FRG, helped each other with the oxygen supply and the associated technical equipment and some free hospital places in order to save lives, since the Corona-virus can cause very serious and life-threatening pneumonia, which is proven to be highly contagious.

For the time being, however, there has just been another argument in Europe about the euro-bond or Corona-bond and could probably divide Europe apart, if the matter and the commission of our all God and Creator are not finally given the upper hand.

Fortunately, an agreement was reached within Europe by putting together an emergency package with 500 billion euros and making it available for the weaker countries of the EU.

In the German language, the Latin name CORONA means crown and thus it is a crown virus, which indicates a high risk of infection, a high risk to life and a high level of difficulty in combating and especially the elderly already in general has threatened life.

Mainly the nurses, the caregivers and the doctors in the hospitals, but also the caregivers in the old people's and nursing homes, who now all have to work directly at the front, were praised because the safety conditions and protective equipment on every respect are missing or were missing and were not available in time, but many poorer countries of the world with a large population density will most certainly still have no sensible protective equipment and too few technical devices for oxygen ventilation.

But did this pandemic and any other plague really come out of left field and quite surprisingly?

Was that really the case?

Of course, my person does not know where you and many others live, but for me personally this and that epidemic was not particularly surprising.

How did that actually become possible?

If you are permanently in a process of repression and have set up and shaped your life in this way, or if you are only concerned with your own interests, then you will be overtaken by such and other disasters, which demonstrably did not have to be necessary in the current form.

Mankind should really be clear about this, and with it also that the correspondingly available and suitable capacities and their valuable knowledge as managers were obviously not heard or could not take the place to which they urgently belong or should have belonged long ago!

For this reason, my person would now like to make a double strike and hereby submit to you and people like you a double edition, which preferably affects the worldwide Christianity.

My person unequivocally wishes, that every responsible Christian who has put his parents, a parent or the grandparents, a part of the grandparents or even the great-grandparents in an old people's or nursing home and knows the seriousness of the situation, will make a protocol by everyone as a Christian must truthfully record why, as a baptized Christian, one had not or could not have freed one's father or mother, grandmother or grandfather, great-grandfather or great-grandmother from the situation that had become dangerous, which is not in principle, however, often will be present in some nursing homes!

This protocol has to include the exact details of the living conditions or the total current social circumstances of each of these Christian people, but the protocol particularly refers to the new situation due to the worldwide shutdown!

These fully verifiable protocols are listed by name and then sent to the Vatican by not only listing those who have died from the Corona virus in old people's and nursing homes, but also having to list all other residents and their family members in full!

My person hopes, that an absolution of the respective family members of the partially designated deceased and the endangered residents will not take place so easily, otherwise the devil will not be able to be dealt with for long!

Note: "Let`s have more of the same" can not go on any longer!

It is now up to the Heavenly Court, because everyone is now going one`s own way, which always leads at least indirectly to the roots of their ancestors, since many late Europeans were also aware of the circumstances of my person, which clearly affects Italy, because it is a matter of oversized Events through the cultural trips of my person in Florence and Rome by means of the Italians, what was already clearly recognizable about 20 years ago!

It would have been the Clergy's job to undo the above protocols, but if man rather hold the host or the "Lamb of God" to the devil, or even ignore the Book of  Revelation or understand it as a Biblical story of the New Testament, then you have to no longer wonder if the wisdom of an educated 101 year old mentally clear woman at the end of a talk show on TV was only laughed at by some of the talk guests, because she tried to remember God with simple, understandable words by HE sends us this "hammer pandemic" so that we will all come to our senses again!

Of course, some of the  same people of the mentioned Talkshow would only smile about it, if they were told that not only the profession of a trained caregiver should be upgraded financially, as discussed in the talk show, but also the profession of a housewife and mother should be given financially and in every way more recognition and more tasks, e. g. the necessary contacts with the old family members, including a fixed salary within the framework, measured by the numerous of the whole family and measured by the salary of a current caregiver, as a housewife, with the pension of an old family member can be added possibly.

On this very important turning point back to the norm, my person also wishes, that all of the currently affected mothers of small children have to fully recorded reports on the whereabouts and daily routine of newborns and small children up to the age of 5 1/2 years.

The protocol has to be include the institutions or kindergartens and the respective named persons, who have taken on the duty of supervision and upbringing of the small children instead of the parents.

So that no misunderstandings can arise, my person would like to make clear that my own children are not exempt from this requirement, since it is a matter of more than life on earth!

Apart from that, my own children could not help the serious situation of their mother and the world, which means that they suffered some disadvantages during their childhood.

Despite of everything, my children always came first of all for my person as a housewife and mother, which of course includes the belief in God.

Everyone should know that the visiting card that parents or a parent could present, not only on earth, but also at the end of life must be presented and will  be “read” from the legacies or the children !!

But you and many other people obviously do not know this and everything else, but at the latest by the next pandemic or the next catastrophe you will hopefully all be wiser in this regard, if you and your kind have not given up "the wheel" in time, but then it could already too late for many or even for everyone !!

PS .: These billions of euros, which were left for such emergencies all over Europe and in the USA, could have ended or prevented gigantic famines with a small amount of it, which among other things could also prevent a plague!

Note: You can also clearly see from this that there are currently very few or no sensible and forward-looking politicians in the world and you have to make aware of it, that this has brought and will bring mankind into very significant circles of danger, which are increasing and can become as big as some of you behave as politicians, worldly dignitaries, professors and doctors, who only smile at the wisdom of individuals !!

With this in mind, 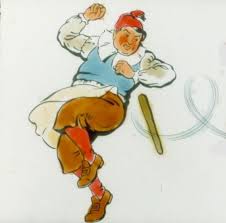 Among other things with Federal Minister of Family Affairs Franziska Giffey and the Greens-boss Robert Habeck.

The important words from the 101-year-old Mrs L. H.: See the closing word at the end of the video or see below:

"Apparently people have to get a hammer from time to time from God that they can live normally again, if you look at the development; now we have the salad.

And now one can only hope that this immense emergency will bring people back to the values that are really necessary."